This weeks awesomeness more than made up for last weeks crumminess.

I had my doctor’s appointment last Wednesday to get the x-ray to see what was up with my foot.  As I sat in the lobby, I prepared myself for the worst.  The worst was that it was broken broken and would require a plaster cast and that I wouldn’t be able even swim.  What I got, instead, was my best case scenario.  X-ray looked completely clear!  I was so relieved.  It could have been a small stress fracture that isn’t showing up on the film or it could have been a bone bruise or it could be a tendon/ligament/muscle issue.  Either way, Dr. Lane recommended another two weeks just to be safe and a bonus week if I wanted to be an extra good little girl (which I do).    I had already been in my boot for a little over two weeks at the time.  Another three weeks won’t kill me.  It’s actually pretty comfortable.  I’d rather be safe than sorry.  I have no major races on the schedule this year.  I want this thing to heal well and correctly.  Then, I got the really great news……I not only got clearance to keep swimming, but he said I could ride as well!!!!  Yay!!!!  Basically, anything that doesn’t cause me discomfort is A-OK!  I was ecstatic.  I’m pretty sure he has never seen someone so thrilled to be told to wear a walking cast for 3 weeks.  I was just over the moon!

That same evening we were driving to the Team FeXY happy hour and I had my hand resting on my stomach.  Up until that point all of Keiki’s movements had been “squirming” feelings.  No real jabs.  Out of the blue, though, Keiki kicked so hard that I got a jab that I actually felt in my hand.  Whoa!  That was cool.  It was just the one little kick, but it was so wonderful.

The next day, Thursday, I took my first bike ride in weeks and my first ride outside in months.  Ryan and I rode for an hour and averaged just under 16 mph, including all the stops along the trail.  Definitely slower than the fall, but it just felt so great to get out there.  It didn’t bother my foot at all.  I was really relieved.  I love my bike.  Love it.

Spandex, however, did not feel as awesome.  I felt a lot of pressure in my gut from being on the bike.  At first I thought it was just the position of the bike.  I later realized that I’m pretty sure it was just my bike shorts constricting me.  I might alter an old pair to put in a maternity band.  I think that would help a lot.  My hope is that I’ll be able to ride outside for a while.  I can see the positioning of the tri bike getting uncomfortable relatively soon, but I can always ride the paved trail on my mountain bike.  I’m pretty sure I will be able to do that for a while still.

The next day, Friday, was another gorgeous, summer-esque day.  We went out for another 2 hour ride.  I definitely was bonking at the end, but I think that was more from my recent lack of training than it is from pregnancy.  I think that will get better in the coming weeks.  I’m confident that I can gain some fitness back.  I’d also like to keep my long ride time at 2 hours for as long as I can.  If it turns into a slow putz, then so be it.  I’d just like to keep the time up there.  All in all, I managed around 50 miles between the two rides, which I’ll take for right now.

I didn’t swim as much as I was hoping for, but I still managed a 6500 meter week, 4,000 of which was in my one long workout.  Swimming feels so fantastic right now.  Even at the end of the 4,000 meter workout, I just felt like I could continue to swim forever.  I have officially signed up for the full 3-event Jim McDonnell swim extravaganza.  It’s a 5k swim on 5/26 followed by a 1 mile and then a 2 mile on 5/27.  I’ll be 27 weeks by then, but I’m pretty confident it won’t be a problem.  I’ve got a plan to get me there.  I’m excited to have something to train for.  5K is a distance I’ve never done in a swim and I’ll be happy to check something off the bucket list.

As I’m feeling better, Keiki is getting stronger.  I was lying in bed on Saturday night and we were just about to turn off the lights.  All of a sudden I felt another big jab like I had felt on Wednesday.  I told Ryan to quickly give me his hand and then placed it in the spot.  Within a matter of seconds, Keiki kicked him twice.  You should have seen Ryan’s face.  “Oh, my God.  I felt it,” was all he said, but his face was one of the best things I have ever seen.  I felt myself tearing up like the first time we saw its little shadow on our 8 week sonogram.  Sharing that with him might be my favorite moment so far.  I was just lying there watching Ryan and Ryan was lying there watching and touching my stomach.  It’s one of the happiest moments I can remember.  Of course, I always love my husband, but in that moment I felt like my heart was going to explode out of my chest.  It’s the type of feeling I’ve had in our happiest and saddest moments.

“Thank you so much for my baby,” was all I could say to him.  I just felt so overwhelmed by the moment and so grateful to have it.

Since then the jabs have gotten stronger and more frequent.  Sunday night was a particularly active time.  I woke up the middle of the night and the thing just kept kick, kick, kicking.  I grabbed Ryan’s hand again and it just kept kicking away at him.

We had a routine midwives appointment on Monday.  Everything looks great!  She asked me if I had felt it moving yet.  I told her that I had actually been feeling it for the last week and a half and that Ryan had even felt it over the weekend.  She said what I already had suspected.  It’s pretty darn early for it to be so strong that Ryan can feel it.  While I find this exciting right now, I began to realize what this could mean for down the road.  Keiki is probably only  8-9 ounces and  8 inches long at this point.  Can you imagine what this kid is going to do to me with another 6.5lbs?!  Yikes.  Ryan said that if this kid has my quads, I’m in trouble.  I’m telling you, I’m breeding a warrior here.

My favorite part of the midwives appointment is always listening to Keiki’s heartbeat.  This time, it’s heart rate was 142, which is on the low end of average.  She said that if we believe in old wives tails, that means it’s a boy.  I’ve already been thinking that it’s a boy, but you just never know.  In my head it’s a boy.  When I talk to it and envision it, I’m envisioning a boy.

The way I’ve explained it to friends is that I LOVE, LOVE, LOVE Italian food and Mexican food.  I couldn’t pick which I love more.  I love them both equally.  If we end up with a girl on delivery day, it will be like I walked into an Italian restaurant and ordered my favorite, gnocchi (I’ve updated this example since its original telling.  I’ve decided I like gnocchi better than eggplant parmigiana) and instead they brought me my favorite Mexican dish, a chili relleno.  It would take my head a second to process that it wasn’t what I ordered, but it would still be freaking awesome!  After telling a friend this story, they said if we have a girl they are going to call her Chili.

We have our 20 week sonogram on Monday.  We are NOT going to find out.  It’s going to be hard, though.  I definitely want it to be a surprise, but it’s going to be awfully tempting to look if the sonogram tech goes to the general area.  Ryan said he’s going to blindfold me.  I mean, if it’s a boy who takes after his Daddy it would be hard not to see, if you know what I mean 😉  (that one was for you, dear).  Haha.

All in all, I am still feeling absolutely fantastic.  Better than I have ever felt.  I’ve definitely confirmed that the case of the blues that hit last week was definitely injury related and not pregnancy related.  As soon as I found out the results of the x-ray, I’ve been my usual self.  I’m actually really enjoying feeling pregnant so far.  Especially since Keiki is moving regularly it is awesome to never feel alone 🙂

I would be remiss to say that Keiki is not the only athlete in this house.  Roo Roo started Agility II class and is loving it.  The first class was a refresher on jumps (which she rocks at) and she also tried the weave poles for the first time.  It’s so funny to watch her.  She cannot wait until it’s her turn and she is super competitive.  She also barks at the dogs that are better than her, like she’s talking trash.  If she wasn’t a dog, I’d swear she was actually my child.

Roo gets a jump refresher

Goals for this week: 12K in the pool, 70 miles on the bike and 2 lifting sessions. 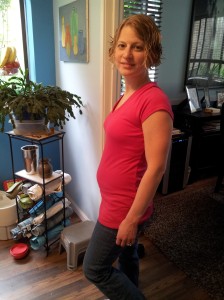