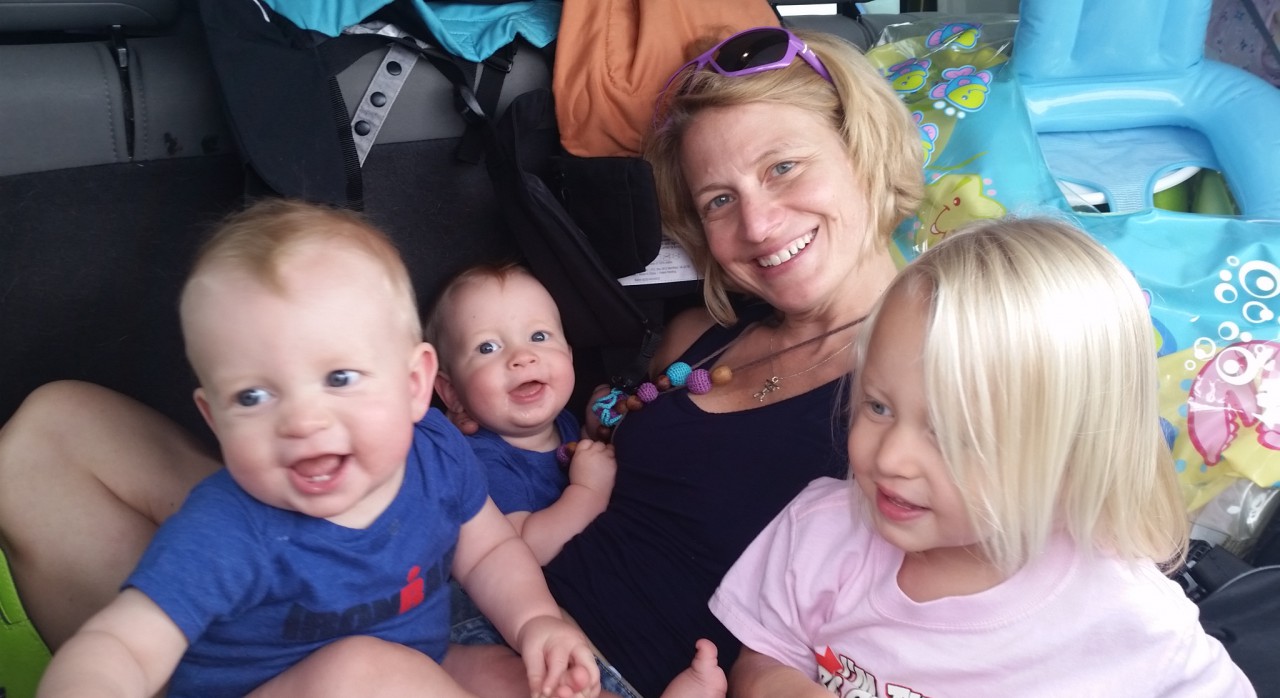 This past Sunday was the Tussey Mountainback 50 mile ultra marathon and relay.  I’ll be completely honest, a month ago I wasn’t really looking forward to having to run in a relay 2 weeks removed from an Ironman, but as the day approached I found myself excited for a fun, low-key girls weekend.

Katie, Christina and myself carpooled up to State College, PA on Saturday.  Even though I’m from PA, I’ve never been to State College.  What a cute little town.  We putzed around, had lunch at The Corner Room (awesome!) and then headed to packet pick-up where we met Tom and Tammy.  (As an aside, when the hell did I get old?!  It’s kind of snuck up on me.  I cannot believe how young college kids look!  I swear I wanted to pinch their little cheeks and buy them candy.)

It was great having Tom to guide us around town.  He’s from there, went to school there and goes back all the time for games and family visits.  I’m not sure, but I think there is a statue in his honor somewhere in town.  He took us to some local watering hole to watch the Penn State game.  We met up there with Doria, Charlotte, Mel and her husband Joe.  The gang was all there.  What a fun evening!

The highlight of the evening for me, was busting Christina’s chops.  We are pretty much polar opposites and it makes for fun banter.  I am a bit crude.  Christina is a perfect lady.  I am hopelessly extroverted.  Christina is more reserved.  I am ridiculously competitive.  Christina is not.  It makes for some pretty amazing quotes.  My favorite one of the evening was when she explained her swim strategy in races.  “That’s why I breast stroke for the first 200 meters of the swim.  I don’t want to put my face in other people’s pee.”  I love Christina.  It’s just so refreshing to get a completely different perspective.

She was freaking out about being on a team with Mel and I because we are “fast” and she didn’t want to disappoint us.  As I sat there (drinking my 4th glass of wine), I tried to confirm for her that I could not care less about how we did.  In fact, I had completely forgotten to pack any race nutrition for the weekend, but made sure I had my feather boa and tutu.  Still, she didn’t believe me.  So, instead, I took the opposite tactic.  I told her if she didn’t run an 8:45 pace we were going to kick her off the team.

Race morning we loaded into the car and headed to the Tussey Mountain ski resort.  We had two teams participating.  Team ‘Bringing FeXY Back’ was made up of Mel, Christina and myself.  Team ‘What the FeXX?’ was comprised of Tammy, Charlotte, Katie M. and Doria.  We definitely made for the most fashionable team with our tutus and FeXY gear.  The relay consists of 12 legs that are split by the teammates while sticking to a fixed rotation.  They range in distance from 2.8 to 6.2 miles. The first runner starts at the race site and runs to the first transition point where the other teammates and the team car are waiting.  Mel was our first runner and Tammy was the runner for our other team.  The rest of us piled into the car and drove straight uphill to the first transition area.  We were at a ski resort and poor Tammy and Mel had to run straight up a mountain.  Fun times.

Christina was our next runner.  As we waited for Mel at transition 1, Christina was nervous.  Remember, I had told her 8:45s or she was out.  She looked great when we drove past her on the way to Transition 2.  She ran into T2 and as she passed the relay bracelet to me, I heard her pant, “8:14s”.  Ha.  You go sister!

It was my turn.  I had a flat to slightly downhill section.  Time to go fast!  I was actually kind of looking forward to running fast.  It was a beautiful fall day in the Pennsylvania woods.  The leaves were in peak season.  The temperatures were in the 40s, perfect for running.  I started to run and….immediately rolled my ankle on the gravel road.  I had a moment of panic, but knew I needed to keep moving so it wouldn’t swell up and freeze.  I looked at my Garmin.  I was .14 miles into my first leg.  I was scheduled to run 16+ miles total on the day and could NOT bail on Mel and Christina.  That would leave them with almost a marathon each to run.  No way.  I chugged along pretending nothing happened and then did it again a mile later.  Uh oh.  I finished my leg, passed off the bracelet to Mel and then told Christina and Joe (Mel’s husband and our driver for the day) what happened.  They were wonderful.  They rallied around me, got me ice and ibuprofen and helped me tape it up with duct tape.

While I waited for my next leg to start, I knew I had to try it and see how it felt.  Fortunately, it was completely manageable for the rest of the day.  The only time it started to hurt again was on my last leg which was a pretty steep downhill to the finish.  I was grateful it held together.

Our team did an absolutely amazing job.  Mel had the toughest day.  She basically ran up a mountain all by herself over 19 miles and kept a smile on her face the whole time.  Christina really had a break through running day.  She definitely pushed herself and had a blast doing it.  We were at about mile 30 when Christina started doing some math in her head.  She told us that if we kept things up we could finish under 7 hours.  That really lit a fire.  It was so funny because I, Miss Competitive, had no idea and meanwhile Christina is crunching split times.  Talk about role reversal.

We ended up finishing 3rd in our relay division with a 6:55 total time.  We were all really happy with that.

Team ‘What the FeXX’ had an awesome, if not adventurous, day themselves.  Charlotte, who started with a hamstring injury to begin with, ran a fabulous first leg, but then injured herself further and had to pull out.  Doria, had a ridiculously tough first leg and knew something was wrong and also had to pull out.  That left Katie and Tammy.  They were both such troopers and ran the team home.  It was a really impressive effort.

Doria, she’d find out later, actually has a stress fracture in her foot and is now in a hard cast.  That’s a total bummer, especially since she has Ironman Cozumel in a month.  Unfortunately, that’s not happening for her now.  I’m sure that is an incredibly difficult thing to deal with, so please join me in sending Doria big hugs and thoughts for a quick recovery.

It was such a fun day.  I think what I appreciated the most was spending time with folks I haven’t hung out with before.  It was a great opportunity to get to know some of my teammates better.  It was also inspiring to be around the runners doing the full Ultra that day.  We would yell and scream for everyone that we passed and everyone got a smile out of the tutus and feather boa.  We had several of them thank us after the race for our support.  It was nice to know that in addition to having fun, we might have made their days a little easier.

He puffed out his chest and said, “I’ve been to Kona four times.”

“Oh my gosh, I just went this year too,” I shrieked.  He looked surprised.  I don’t think he was expecting that response from a girl in a tutu and feather boa.  It cracked me up because it was the first time that someone bragged that they went to Kona and I could respond that I had as well.  Weeeeeeee!  His first year was in 1982!  Wowza!  I can only hope that I can still do this stuff when I’m anywhere near my 60s.  That goal drives me.

Big thanks go out to Katie for being chauffeur extraordinaire this weekend, to Tom and Tammy for their hospitality and to Joe for driving us all over the Pennsylvania mountainside.  It was also, as I have mentioned, such a wonderful group of people to spend a weekend with.  Great people make for great times!

I’ve got an appointment to get the ankle checked out tomorrow.  It’s still feeling wonky.  We’ll see.  Either way I have vowed that I am not running until Dec 1 at the earliest.  This girl needs a break.