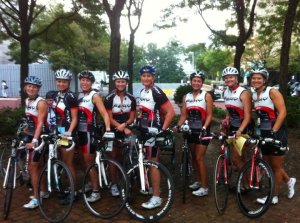 This past Sunday was the Reston Century Bike ride.  I met up with a group of FeXY ladies at 6:30am to get started.  When I had originally said I would do this ride with the FeXX gals at a leisurely pace I was under the impression that I would be in the relaxing stage of my tri season.  I never anticipated that I would be training for another Ironman.  I suddenly found myself a little anxious about “wasting” a training ride at a “fun” pace.  Ryan was going to start with a faster group about 30 minutes after me.  He had been pressuring me slightly to focus on my own training and to peel off with them once they caught up.  I entertained this thought for a little while, but by the time his group caught up, I found that I was having a freaking blast on the ride that I was on.

10 ladies started with the chick peloton.  It was a gorgeous morning, perfect temps and clear skies.  At mile 30, Karis, Kristin and Amy branched off to follow the metric century route while Irina, Christina, Mary Kay, Katie, Cindy, Sara and I pressed on to follow the 106 mile route.  Other than me, it would be the first century ride for all of them.  Wow!  It was so impressive to be a part of a group of century rookies.  Especially, since this would end up being no ordinary century.  It turned out to be a challenging day with many obstacles.  Around mile 70 our gorgeous day went down hill in a hurry.  The rain was no big deal, but once the thunder started, I got a little nervous.  At first it was just in the distance, but before long we found ourselves right in the midst of a pretty nasty storm.  All we could do was push forward.  We were a long distance from the next aid station or from another bail out option, so we just pedaled.  All of a sudden, the hair on my arms stood up and there was an ear-piercing crash.  We watched as lightning hit an electrical box just across the street from us, literally 30 feet away.  It was immediately followed by the shrieking of 7 women.  I’m pretty sure we all picked up the pace at that point.  Once we got to the next town, I asked if anyone wanted to find shelter for a little while and see if it would blow over.  The resounding answer from the ladies was to push on.  We finally arrived at the mile 86 aid station.  We were all, admittedly, a little rattled.  I asked the EMT staff that was there if it was a dumb idea to head out.  He told me that there was a severe thunderstorm warning for the next 30 minutes and that if it felt unsafe we should find shelter.  Still, though, the overall sentiment was to push on.  We had 20 miles to go until we got back to the finish.

During the next 10 miles, the skies darkened even more and the wind picked up.  It was an ominous stretch.  We were all still a little on edge from the lightning strike and made the decision to take cover at Transitions Triathlon in Leesburg.  What a lifesaver they were!  They let us hang out for the next 30 minutes.  We watched outside as the electrical storm faded to just heavy rain.  Again, though, without exception, every person wanted to keep moving.  We were at mile 93 and this group of tough ladies had no intention of falling short of their first century attempt.  We got started again.  The temperature had dropped significantly and the rain was heavy.  It was really, really cold, but no one uttered a single complaint.

At about mile 98, almost as though the weather gods were celebrating with us, the sun came out.  Mile 100 found us in a pace line of 7, cheering with happiness and showered with sun.  What a strange, fun day.  The next 6 miles went pretty quickly and we arrived back at the Reston Town Center with smiles on our faces.  106 miles were in the books.  We started with 6 women attempting their first 100 mile rides and we ended with 6 women having achieved it.  It is a really, really great accomplishment.  I’m so happy I could be there for it!  Some of these ladies furthest ride leading into it was only 50 miles, yet they all pushed on in really challenging conditions with no complaints.  I was in awe of their toughness.

It was a far cry from my first century.  I laugh to think of it now.  I had registered for the 2008 Reston Century.  Ryan told me to have fun.  He had no desire to ever ride his bike that far.  So, I did it by myself.  I didn’t know anyone else at that time, so it was a long, lonely ride.  I’m pretty sure there was crying involved and I know there was misery aplenty.  I arrived back at the Town Center battered and broken.  Ryan was there to meet me.  I clearly remember telling him that it was the worst experience ever and I would NEVER do another one.  It’s ironic now given the path of the last 3 years.

The 2011 Reston Century was an awesome day that more than made up for 2008’s misery.  We had such a great group of women, who remained together and tough the whole day.  It was also a really nice realization for me that not every workout has to be a suffer-fest.  In fact, I feel more invigorated and excited to get back on my bike than I have in a really long time.  I’m so happy to have shared the day with them.

One thought on “Oh the places you will go!”